Could Competition be the Best Thing for Your Business? 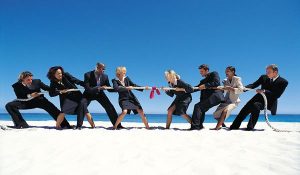 How much time do you spend paying  attention to your competitors?  My experience with businesses is they only pay attention when the competitor hits them between the eyes. Then it’s about reacting rather than being proactive. Sometimes it’s easier to be a follower than a leader.

Walmart was considered the worst thing to ever invade the retail market. But Walmart, whether you like them or not, opened our eyes to pricing and what was possible. Soon we were on  our way to a new phase of retailers. Sure small local businesses closed, others found their niche and  became very successful. The Home Depot and Lowe’s Companies have had the same effect on other industries. But many smaller companies have profited from the advertising done by these two.

If you study your competition you will develop your own niche or pout and pull up your tents and move. Success is what often kills business. Rather than realize that both success and failure are temporary they miss the winds of change. The winds are often fueled by their customer who they’ve taken for granted.

The key is to always be thinking, watching and asking questions and realize there will always be someone looking to dethrone you.

I think that Albany, New York  is about to go through a supermarket renaissance.  Soon we will have our own “Supermarket Square” around Everett Road and Central Avenue. It will be comprised of The Honest Weight Food Co-op, Hannaford Brothers, Price Chopper  and the new kid in town starting the rumble, ShopRite.  ( For those of you who are fans of Trader Joe’s and Fresh Market I don’t mean to slight you but they’re far away from  “Supermarket Square.”) Besides, without “Two Buck Chuck” Trader Joe’s is missing one of its finer elements. As Gary Vaynerchuk, who reviews wines on this popular video blog said, “There’s not a doubt in my mind that the two biggest things that have happened to the wine industry in the last 10 years are the movie Sideways and Two Buck Chuck”. Maybe Trader Joe’s will open a wine store next to their market.

Hannaford and PriceChopper have had a lock on the area for years, competing across from each other on Central Avenue. The Honest Weight Food Coop is about to move closer to “Supermarket Square.” What will happen to them remains to be seen. They have their groopies and Gustoff,  the “cheese head” has amased himself quite a following. My next door neighbor told me she couldn’t have her dinner party until she consulted with Gusfoff about the cheese and the wine.

I believe  Price Chopper with its “gas card” and  community commitment as well as their wonderful new store left Hannaford in the dust. Funny because  Hannaford started their Nature’s Place several years ago which really catered to the “natural and organic foodies” who for the first time had lots to choose from at reasonable prices. Then all of a sudden Price Chopper expanded and blew Hannaford out of the water. At this point Hannaford looks small and uninviting by comparison. Hannaford is definitely strapped by its small store and maybe by the Delhaize Group out of Belgium who isn’t familiar with the Albany market.

One trip through Price Chopper and it’s hard to go back to Hannaford–which was my favorite because of the “Nature’s Place.” One thing about Hannaford, it’s smaller and quicker to get in and out but is this enough to keep it alive? I wonder how much business they’ve lost because of the store size and shelves that often look empty. The store needs a “make over” but the employees are still friendly, look great and always have time for a conversation.

But now the fun begins. I’ve known ShopRite  for years having had a furniture store directly in front of them  in Hudson, New York. (At the  insistence of ShopRite, it was either them or us  because they needed a parking lot where our business stood.) We closed our business and watched   as  the wrecking ball sent us into history.  After 16 years it was a big change for us, but not all change is bad. ShopRite then demolished their old building and rebuilt a magnificent store. This started in 1990–ShopRite knew that Hudson was thriving and changing.

Interestingly enough, I was given an assignment by DeLonghi to be part of ShopRite’s grand opening a couple of months ago. There I was, in the middle of hundreds of people and cooking roasted pepper panini. I can’t  remember the last time there was such excitement in town; for sure not because of a supermarket opening.

The foodies were all there, this time they were  the employees of ShopRite. The cheese boys from Jersey didn’t miss a beat, giving out big slabs of cheese along with “the cheese story. ”  The employees were definitely knowledgeable. Since that time I’ve been told that part of their training is knowing everything about the various cheeses. I loved it, felt right at home, since I come from the restaurant business. You really have to have a restaurant or cooking background if you’re Italian. Up until last year, we had a Thanksgiving cook off and everyone showed off their culinary skills. It was quite intimidating but thank goodness my 85 year old cousin decided not to compete last year with her stuffed artichokes leaving the prize money back on the table. The point is that many people take their  food seriously as does everyone in ShopRite including the cooks, and those lovingly shining up the oranges.  When the broccoli rabe was on sale people were scrambling over one another to stock up.

You know you never know what you’re missing until you get a new love in your life. Once who brings you something that you never thought possible. So it is with ShopRite. Customer service people standing at the end of the checkout counters asking if you have everything.

This is so smart, great customer service–“I’m here to help and make sure you haven’t forgotten anything.” How many times have you been in the check out line, forgot something but didn’t want to lose your place in line? I wonder if they’re keeping track of how much is added to the customer’s bills at the end of the day because the customer service person has gone back to “pick up a few things” you might have missed.  “I brought an extra dozen eggs in case you need one more.” Customer service for sure can make you money.

Everyone in customer service seems to take their jobs seriously, I didn’t see anyone rolling their eyes when the old lady dropped her groceries out of her cart. You and I have both seen that in our supermarket travels.

Having culinary trained chefs in the kitchen is a nice touch; a better touch is one walking around and talking with customers. Now that’s customer service. I made it a point to talk with chef, compliment him on his tofu dishes which were very good. Cooking classes, recipes, small cafe to have lunch and the Health and Wellness Center, which includes an on site registered dietitian. My friend actually had a consult at the Wellness Center and said it was amazing; no lectures,  just a conversation–“tell me what your day is like and we’ll figure out how to work in the foods that will keep your  blood sugar from spiking.”

The amount of prepared food made me realize that ShopRite had done their homework. Yes you can get baked chicken anywhere but won ton soup? (Which was quite good by the way. Besides, what single person needs a whole chicken?) Small meals packaged,  a varied menu, lots of steamed fish and vegetables and cooking going on all day.

So what to do if you’re not the new kid on the block for some new ideas? I think it’s unwise to take your customers for granted. Some of us get out of town occasionally, have been to Whole Foods and Trader Joe’s.  We know there’s better things out there and we’ve been salivating and waiting.

How will ShopRite fit into the community? “ShopRite Partners In Caring” supports emergency food pantries, soup kitchens, homeless shelters and much more. Sounds like they have their niche.

Ask your customers how you could kick it up a notch and listen. Don’t laugh in the back room because the customer wants you to put in a day care center. Of course ShopRite has a day care center or two around the country.

Have a consumer advocate group for your business, ask them, what  do they see in  the future for your business? Maybe you won’t be making Sweedish meatballs like IKEA but that probably seemed pretty wild in the day.

It’s hard to remain a leader but customer retention is the key to a successful business. Talking with them regularly will  give you new ideas about how to turn them into advocates for your business. The  key is not to be on the end of the curve but to set the curve. This means always looking for the next good idea.

The worst thing you can do is behave as if your customers don’t  matter. Businesses do this by thinking  customers will remain loyal no matter how they’re treated.

Not so honey bunch, there are too many other choices to stay around and be ignored.

Lisbeth Calandrino has been a business coach for over 20 years and develops customer service and sales training programs for businesses of all sizes. Lisbeth still has her grandmother Christine’s recipes and can cook up a pretty mean anchovy and tuna sauce.