Why Captain Jerry Yellin’s Story Matters to all of us 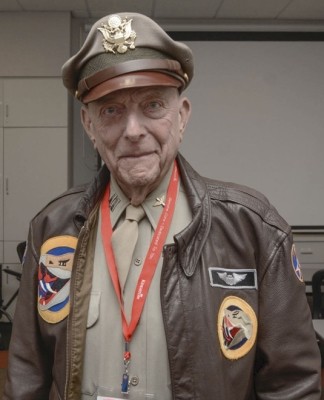 One year ago, I met Jerry Yellin In Fairfield, Iowa at the home of Ginger and Jim Belilove. Jim is an associate of mine from the floorcovering industry; he is also a very dear friend of Capt. Yellin. Six months before my meeting, Jim asked if I might help raise money for a film he was producing, “Last Man Standing,” a documentary about Captain Yellin.
“It would be great if you spent time with Jerry and got to know him, said Jim, you will understand how important the story is to Jerry and its impact on the world.”
I didn’t realize this would include a trip to the 45th National Stearman Fly-In, at Galesburg, IL where I would watch Captain Yellin as he flew a Stearman, and I would experience a ride in one of the open-cockpit biplanes. The culmination of the day would be Captain Yellin speaking about how he learned to fly. This is something I will never forget.
Prior to meeting Captain Yellin, I had no real experience with war.
With television just coming of age in the late 40’s, there were no cameras on the battle field, literally there was nothing to know. Contrast that with today when we are actually on the battlefield.
None of my relatives had served so war was nothing we discussed. It wasn’t until I was 9 years old; I had my first awakening of war horrors. I lived in a small town where all the mail was brought to the same mailbox. I used to deliver the mail to the neighbors, and one day a very official letter came from the Department of Defense. I ran to deliver this important-looking letter and stood there while Cissy Sharp started screaming and crying. The letter informed her that her brother had been killed in the Korean War. This is when I began to understand the pain of war. When my friends started returning from Viet Nam, I learned about Post-Traumatic Stress Disorder or PTSD, another side effect of war.
I didn’t know what meeting Jerry would mean. Jerry would be a real ‘in person’ awakening for me. This would be when I would understand that war produces living casualties; those returning soldiers with PTSD. I spent a week walking and talking with Jerry. That meant trips to the gym, the golf course and watching Jerry engage with many of his friends. Jerry also talk me about the David Lynch Foundation and the Operation Worrier Wellness.
Saying that Jerry is charismatic is an understatement. Jerry is also very humble; he understands people, and time spent with him is transforming. It made me question my thoughts about war and those heroes that are fighting for my liberty. Never again will a pass a veteran without thanking the soldier for fighting for my freedom.
As you could tell from the May 28, New York Post article, “WWII’s ‘last fighter pilot’ relives the fateful flight—and the PTSD that followed.” Capt. Yellin is a dynamic man, with a very sharp memory and definite opinions about war.
I remember Captain Yellin telling me if you thought you were shooting at real people; you would never have been able to do it. You were fighting so we would all be free. Until 9/11, I never thought about my freedom, did you?
As Captain Yellin stated in this interview with The NY Post, “If you want wanna stop war, everybody would go to war naked. Then nobody would know who to shoot.” Television has shown us that war is very real and we are fighting with real people; who are very much like us.
If you are interested in helping Captain Yellin complete his documentary, please go to Fundabilities.com, “Last Man Standing.” All donations are tax deductible.
Lisbeth Calandrino is a speaker and trainer. To have her speak at your event, contact her at [email protected]
Share This:
Read More