Get off the Couch, it May be a Matter of Life or Dealth

By Lisbeth Calandrino|2017-03-03T12:06:54-05:00September 21st, 2014|Categories: Blog, Health|Tags: Bob Thacker former CEO of Office Max., British Journal of Sports Medicine, Engine, Rip Esselystne, treadmill desk|Comments Off on Get off the Couch, it May be a Matter of Life or Dealth 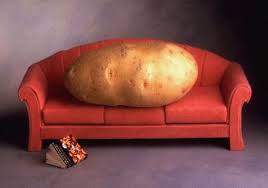 I have become extremely interested in health over the past five years. Two years ago I became a certified personal trainer bringing health to the forefront of my live. Cancer and heart disease have taken at least 10 people in my immediate family.

I remember when going outside was what I lived for. As a kid, I wanted to jump on my bike, feel the wind against my face and ride. To me, it was more than transportation; it was freedom; I was in my own world away from my mother’s watchful eyes. Sitting on the couch wasn’t that much fun.

I wasn’t that much interested in television, and the iPad wasn’t released until 2010. You would think it’s been around for 20 years. Most of us come home, eat dinner and relax on the couch with several connected devices. We can watch television, answer mail and shop in our own home. According to Bob Thacker, former CMO for Office Max, “The consumer is engaging in discovery for not only large things, but for small things also.” That means more time on the couch.

What about those people at work?

If you’re like the rest of us, you’re sitting at your desk for hours at a time. If your job involves cranking out paper, how can you avoid it? What’s worse, when you get home, you’re sitting on the couch until you go to bed.

The British Journal of Sports Medicine studied the health of people who watch TV and compared it to those who don’t watch TV. According to the study, we can expect a reduction of 21.8 minutes from our life span for every hour watched! If you watch six hours of television daily, you’ll live 4.8 fewer years than a person who doesn’t watch television. Apparently, it’s not the television or the iPad; it’s the sedentary lifestyle. We’re all turning into the dreaded couch potatoes. 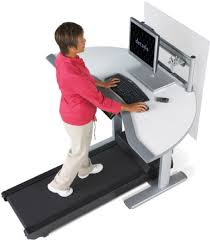 Walking a working with a treadmill fitness desk.

Many of us sit for 10 hours straight. At that rate, I will be dead before I know it, with my head on my desk. Does that mean us working couch potatoes need to buy a treadmill fitness desk, so we can walk and work? Apparently not only can you “walk and work” but you can eat lunch, answer your phone and lose some weight. Before you run or walk out to get one of these contraptions, you might want to think about it. I’m still not sure how I can walk, eat, talk and use my computer at the same time, there are some other suggestions. It’s obvious that sitting for 6-10 hours straight isn’t good for your short or long-term health. It doesn’t matter what you do, you just have to do something.

Dr. Saurabh Thosar, a post-doctoral researcher from the Oregon Health and Science University, found that five minutes walked can reverse harm caused to leg arteries during prolonged sitting. According to Dr. Thosar, “We have shown that prolonged sitting impairs endothelial function, which is an early marker of cardio-vascular disease and that breaking sitting time prevents the decline in that function.”

So don’t wait for your lunch break to walk. Get up every hour and put on some music, get on your treadmill, get out your hula hoop and get five minutes of exercise.

I just heard my timer; it’s time for me to start my five minutes.

Lisbeth Calandrino has been providing business consulting on sales and customer retention for the past twenty years. She has never forgotten her love for sports and has spent the last 5 years participating in Yoga and is a certified personal trainer through PTIA.

A recent Engine 2 retreat has continued to renew her interest in health.