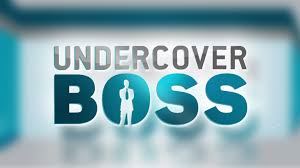 After watching season after season of “Undercover Boss” I’m thinking we need  a show called “Undercover Employees.” They could find out what their bosses are doing.

“Undercover Boss” is  an American reality television series, based on the British series of the same name and producted by Studio Lambert in both countries. Just as the title suggests, the boss goes undercover to see what his entry-level employees are doing.

Two things that seem glaring; there is little customer service training and “bosses” don’t know what’s going on in their businesses. In fact, most of the bosses are amazed at what’s going on!

I was watching the “Undercover Boss” last week and was disturbed by the boss’s decisions. He was very generous with the employees he worked with, giving them large sums of money. The problem, as I see it, is that people were getting money to help with their “troubled lives” but weren’t asked to “better themselves” or attend schools, so they could obtain leadership positions.

My hunch is the people will spend their money, have great vacations or new toys but what will they have learned? I believe that people will be more apt to change is there are some conditions to these generous gifts. In fact, I feel so strongly about it. I sent a letter to the “Undercover Boss” and sent some customer service books.  I don’t know if I’ll get an  answer, but maybe the letter with my suggestions will get read! My biggest gripe, where in the  business  world do people get free handouts with no “strings attached?” And what’s the point if the gift isn’t connected with your business?

One great thing about the program is that bosses get to understand their employee struggles and help them grow. One of the best ways to help them grow is to provide opportunities for them to advance within the organization. Promoting good employees is essential to their learning.

In order for a business to perform adequately the “boss” must  be able to communicate with his employees.

There must be a way for the boss to know what their employees are doing without spying on them. This reminds me of mystery shopping; another task that I think is ridiculous. If you think, you’re employees are not acting appropriately they probably aren’t. This problem usually starts when a company doesn’t have a suitable training and accountability program. Teaching and training is one thing, if you don’t hold people accountable for what’s expected to don’t waste the training program. CEO’s must create a business model that is in line with the customer’s and employee needs.

Everything goes back to customer service and how customers are being treated. Front line employees are the ones who need the training and usually get the least amount. Because they’re not seen as the ones who “bring in the money,” they typically don’t get best training.

So far, 100% of the companies have leaders who have no idea of what’s going on in their businesses. How sad.

Many of the problems could be avoided if the leader spent time reading employee evaluations and staying in touch with their businesses.  No matter what business you have, the only thing that makes it work is the customers. The first customer of any business is the employees.

Lisbeth has been coaching business for over 25 years. To schedule a consultation or have her speak at your business, she can be reached at [email protected] Lisbeth lives in Historic Hudson Park in Albany, New York, with her cat Rainyday.