Is it Possible We Think Too Much?

Home/Blog, Motivation/Is it Possible We Think Too Much?
Previous Next

Is it Possible We Think Too Much? 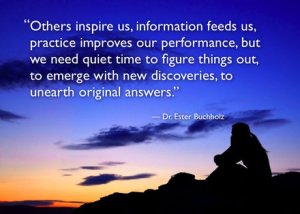 A friend of mine said that I thought a lot. I didn’t ask what he meant I just thought everyone did. Maybe they don’t .

Could it be that most people don’t think?  Spending time thinking is one of the great past times of life, isn’t it?

I had a therapist who once said you can’t get chocolate milk from a turnip field. Now, she was talking about relationships — but the rest of life is like that too.

Think about business; it doesn’t happen from your living room or your showroom. It comes from you thinking about it and then making it happen. Wondering how everyone is getting business won’t help you unless you go talk to them and find out what they know that you don’t. Relationships don’t happen in your living room either.

Thinking everyone knows more than you won’t help either.  Don’t you remember friends from your school who were smarter than you and didn’t become much? I have a better story about Jim Deitz; I’ve changed his name to protect him from all of us trying to find him. Remember when they asked you in high school what you wanted to be when you grew up? Well, Jim said he didn’t want to work and wasn’t planning to. That didn’t make him very popular with the girls or the teachers. Well, the short of the long story is he didn’t work, or at least not like the rest of us, and he became a millionaire.  Winning was his plan and he bought lottery tickets every day. It was his plan for 10 years. It looks like he thought about it.

What motivates us? Could it be thinking? Here’s a good blog post from the Harvard Business Review about motivation.

Remember Mark Victor Hansen, and Chicken Soup for the Soul? As the rumor goes, his book was turned down 63 times before it was published.  So he went out and asked all those who contributed stories to his book to commit to buying a bunch of books prior to publication. By the time he was done, he had enough prior sales that he was into his second publication! What publisher wouldn’t want that deal?

I took a class on book publishing and the first thing the instructor said was, if you have a following it doesn’t matter how bad the book is — they’ll buy it because it’s yours.

Excuse me while I go back and think some more. I’m not sure about what but I’m sure I’ll find something.

Lisbeth Calandrino helps businesses build loyal relationships with their customers through customer service and sales training. Need a speaker? She can be reached at [email protected]. Lis is also the co-author of CONTAGIOUS OPTIMISM!  Learn more at www.contagiousoptimism.net (publisher: Viva Editions).