Because the Other Kids Said So!

Home/Building a Brand/Because the Other Kids Said So!
Previous Next

Because the Other Kids Said So! 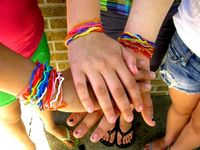 Seven year old Michael was asked on national television why he was wearing the Silly Bandz. His reply, because the kids in school are wearing them. This won’t be the first or last time that people do something because their friends think it’s a good idea.

Prepare yourself, for those of you that don’t know what I’m talking about. The present fad, as of this blog, is Silly Bandz. Silly Bandz are rubber bands shaped like animals, dinosaurs, sports, princesses, and lots more. They come in a pack and can be found in various stores ranging from $2.99 to $5.00.

Manufacturers and shop owners are having trouble keeping up with the craze that is spreading like wild fire. There are lots to choose from– animals and pirates to roses and water creatures — playgrounds are turning into swap meets. Makers are constantly thinking up new shapes and colors to keep the interest high. I went on EBay to look at the latest styles and was amazed to find Silly Bandz in New York Yankee shapes.

What makes this so crazy and awesome is the simplicity of the business. It’s just colored rubber bands in all kinds of shapes.

What’s this mean to you and me?

Why do we make everything so complex? Sometimes simple is better and simple can make you money. I invite you to think about what you’re making complex that’s really simple? Sometimes simple ideas can ignite a fire faster and longer than you can imagine.

Is there something that’s really simple that you’ve made complex? Maybe simple is simple! The wheel has already been invented.

You don’t need a million dollars to create something, you just need to have an idea and go with it. After a few drinks a friend of mine shared a secret she had been carrying for years. I thought maybe it was a story about the one that got away—not the fish kind, but an unrequited love. No, it turned out to be a drawing of an appliance, a drawing of a side-by-side refrigerator. See this, she said, as she pulled out a crumpled piece of paper that was barely legible. I invented this years and years ago but never had enough guts to get a prototype built. Why do you carry it I asked? It’s to remind myself that life is short and getting shorter.

What’s that mean to you? When you’re thinking about starting a business, don’t make it so damn complex. Instead of telling yourself it might be a bad idea, tell yourself it might be a good idea. Sometimes simple ideas can ignite a fire faster and longer than you could ever imagine. As humans we tend to over think things. Sometimes simple is simple. Find ways to relax so you can dream up some new ideas. My favorite site by the way is Serenity Pathways by my friend Bonnie Snyder.

What else can we learn from Silly Bandz? It started as a fad and now everyone is crazy for them including the 20 year old with 4 on her wrist.

Create something catchy, get a new fad going. If nothing else, go buy a bunch of Silly Bandz and advertise on your web site that for every $1000.00 spent the buyer will get a bag of Silly Bandz. The quicker you get on it the more likely you are to catch the first round of customers. If your customers have kids, after seeing your offer, the kids will drive their parents to your store.

Watch the trends, be on the cutting edge, blog about it. Your customers expect you to be smart, why disappoint them? I just ordered 200 for my next seminar; I don’t want to be left behind!