Want to Build Your Floor Covering Business? Get out and Network.

Home/Networking/Want to Build Your Floor Covering Business? Get out and Network.
Previous Next

Want to Build Your Floor Covering Business? Get out and Network.

I’m in one my favorite parts of the country: Baton Rouge and New Orleans. What’s not to like about Cajun cooking, Zydego music and of course beignets from the Café Dumonde?

The city of New Orleans never ceases to amaze me, every time I come here I find something new. My last visit took me to the Garden District where I immediately felt like I was at home. The artsy neighborhood is filled with Greek Revival and Italianate homes. These style homes were built in the mid 19th century and are scrupulously maintained in this wonderful section of New Orleans.  I’m sure that most people first hit the French Quarter to get the full flavor of New Orleans but as soon as I wandered on to Magazine Street I felt that I had just gone home. My home in Albany, New York was built in 1871 and qualifies as belonging to the Italianate era. It wasn’t until I came to New Orleans that I got the full feeling of what the era meant—breathtaking. I was also told at the Whole Foods Market that I might also run into Angelina Jolie shopping in the arts district even though she lives in the French Quarter. To get a better look at the homes, etc, visit New Orleans Online. 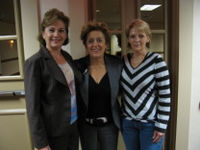 So business-wise, what are flooring retailers doing in the area to build business? The general consensus is that retail business if off; most homes left over from Katrina have been either repaired, torn down or left abandoned. Many of those that have been torn down are being turned into commercial areas where there seems to be plenty of business. I’m told that money was appropriated for the hospitality market, such as hotels and restaurants to bring back the tourists and things are starting to move forward. Many retailers report having contracts for national hotel chains that are using local contractors and suppliers to rebuild.

I spoke with Kimi Walker, salesperson at Chavrin Brothers — a 132 year old store — in Chavrin, LA outside of Baton Rouge about business and what’s working. Kimi reports that she is looking for outside business and has begun by calling on real estate companies. Kimi will probably start delivering her “sussi,” which is a little gift that sorority sisters delivered to their new pledges. Chavin Brothers is a charming mini-home center with a history that goes back to 1875—something no other home center can claim.

Kitty Miller works for Kennedy Decorating Center, another company of 35 years in Franklinton, LA. Kitty reports that the retail business overall seems to be sluggish but that the commercial sector is unbelievable good. The business was recently sold, but the original owner is staying on for a year. Kitty says that James is a wealth of knowledge and can answer most any question about flooring. Not only that but Kitty says he has made it his business to know everyone in town and spends most of his time networking.

I asked Kitty what will they do without his information when he leaves and she told me that he has made several CDs on installation procedures and on product knowledge. What a smart thing to do.

Kelli Rosher, one of those techie, smart, 30-year-olds at Barry’s Flooring tells me that their Web presence is very important to them; always thinking of new ways to reach out to customers.

A call to Heysi Fuentes, the owner of Integrity Carpet (a relatively new store in New Orleans), pretty much echoed the commercial market. Heysi just came back from a banquet dinner hosted by the Apartment Association of Greater New Orleans for their vendors. Her report is that this a great place to network and gives her a feeling of belonging. Everyone at the event was positive and is networking to build more business.  “If you’re going to do well in business, you will have to be active rather than passive," says Heysi.

In August Heysi had great plans for the Home Show but she and her family had to evacuate because of another hurricane and the show was cancelled. It’s replanned for the spring and should be a great event. I know she works hard at it and if there’s a job to get look out for Heysi.

What are retailers doing?